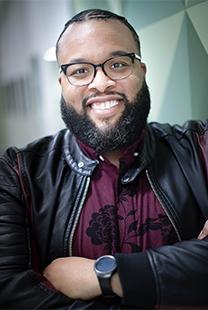 Dr. Jerome Hunt has been teaching in the History, Political Science and Ethnic Studies department since 2017 and serves as the advisor for the African American Male Education Network and Development (A2MEND) club on campus. Dr. Hunt specializes in American Government and Political Behavior, Black Politics, and African American LGBTQIA+ Politics. He received his BA in Political Science and Masters of Administration with a concentration in Public Administration from the West Chester University of Pennsylvania and his doctorate from Howard University.

Dr. Hunt is a scholar-activist who is involved locally in political organizations, LGBTQIA+ organizations, serves as the Chair of the LGBTQ+ Caucus and Member-at-large of the Executive Council for the National Conference of Black Political Scientist, and has previously worked for the Executive Office of the President of the United States.